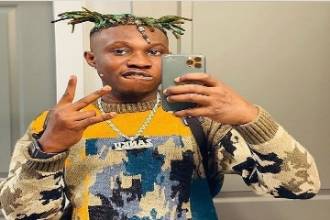 Zlatan (Omoniyi Temidayo Raphael) is a Nigerian singer, songwriter, rapper, entertainer and dancer. He is the originator of the viral dance “ZANKU” which is an acronym for “Zlatan Abeg no Kill us”, and the catchphrase “Kapaichumarimarichopaco”.

He won the Airtel sponsored One Mic talent show in 2014, which was held in Ogun state, Abeokuta.

Zlatan first gained recognition when he released a single titled “My body” featuring Amide, which popular Nigerian musician Davido filmed himself dancing to in 2017.

Zlatan got further recognition after he was featured in a song titled “Able god” which also had Chinko Ekun and Lil kesh.

His song titled “Zanku” came with a dance routine which went viral and became the new dance craze of the country after “Shaku Shaku”.

In a short time, Zlatan has managed to gather significant attention, and along with Naira Marley, he became the most sought after Nigerian artiste in 2019/2020.

The below is the profile of Zlatan ibile:

Zlatan ibile (Omoniyi Temidayo Raphael) is a Nigerian singer, song writer, rapper, dancer, stage performer, entertainer who was born on the 19th of December 1994 in Ilorin, Kwara state. He also has roots in Ekiti state.

He won the One Mic talent show which was sponsored by Airtel when he was just 19 years old.

He decided to focus on his music career after he finished his secondary school education.

He then proceeded to the Moshood Abiola Polytechnic and got a national diploma in business administration.

Zlatan decided to pursue his music career after he finished secondary school, he won the Airtel sponsored One Mic talent show in 2014, when he was just 19.

He first gained public attention when he released a single titled “My body” featuring YBNL boss Olamide in 2017.

Zlatan got further recognition when he was featured in Chinko Ekun song titled “Able God” alongside Lil Kesh, he then released “Zanku” which came with a dance routine that went viral.

He then featured in Osanle with Davido and also Killin Dem with Burna boy. Zlatan also featured in the controversial song “Am I a Yahoo boy” alongside Naira Marley.

In 2019, Zlatan signed an endorsement deal with Coca cola.

Zlatan has grown to be one of the most sought after artiste in Nigeria, his dance ZANKU spun many hit songs from different artistes and shot Zlatan into superstar status.

He has been nominated for different awards like the city people music awards and the headies. He has performed in some of the biggest shows in Nigeria and abroad, as well as featuring in numerous hit songs.

In 2019, Zlatan was arrested alongside Naira Marley, Rahman Jago and two others for an alledged Internet fraud, he was released on bail a few days later.

Zlatan ibile net worth has been estimated at $500,000. He makes money from Stage performance, endorsement deals, partnerships with big brands, as well as music streaming.

He signed an endorsement deal with Coca Cola in 2019.

He is one of the most popular and influential artistes in Nigeria and was the most sought after Nigerian artiste sometime in 2019/2020.

Zlatan ibile career success has not come without controversy.

He was arrested by the Nigerian EFCC in 2019, alongside Naira Marley, Rahman Jago and two others for an alleged involvement in Internet fraud. He was released from prison a few days later after he paid bail.

Zlatan was also criticized and condemned by fans and celebrities after he released a song mocking BBnaija tacha, after she was accused of having body odor by fellow big brother housemate and eventual winner Mercy.

He was criticized because many felt he was insensitive and such song could have a negative effect on the mental health of Tacha.

Zlatan defended himself by saying he was just having fun and didn’t mean anything untoward by it.

He was also in the news again, when a 9-year-old boy “Segun wire” released a video saying he wanted to go into cybercrime/internet fraud (although it was revealed, he was only joking). The video went viral and caught the attention of Zlatan.

Zlatan created an Instagram account for the boy and started promoting him as a comedian, sent him to a private school and also paid for his upkeep.

Zlatan was accused of using the boy as a means of extortion, this made Zlatan to cut all ties to the boy and released a song with Harrysong to explain all that really happened.

Some of Zlatan ibile popular songs are:

He was nominated for the “Rookie of the year” at the City people music awards.

Nominated for the “next rated” at the City people music awards

He won the award for the “Best new act” at the headies awards.

He won the “Best new act” at the African muzik magazine awards.

He won the award for the “best collaboration” at the African muzik magazine awards.

He won the award for the “song of the year” at the African muzik magazine awards.

Poco lee biography and net worth

Where is Zlatan ibile from?

Zlatan ibile is from Kwara state and was born and raised in Ilorin, he also has roots in Ekiti state.

How much is Zlatan ibile net worth?

Zlatan ibile net worth has been estimated at $500,000. He is one of the most popular and influential artistes in Nigeria.

Which record label is Zlatan ibile?

Who is Zlatan ibile girlfriend?

Zlatan ibile girlfriend is not yet known.

How old is Zlatan ibile?

Thank you for reading my Zlatan ibile biography and net worth, if you have any correction or addition to this post, you can contact us or leave a comment below.