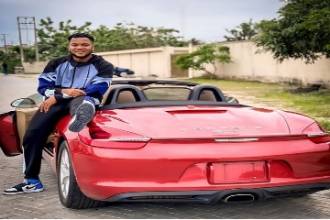 Zfancy (Ubani Zion Chibuike) is a Nigerian YouTuber and social media influencer, who is best known as a prankster.

If you are an avid YouTube user, you must have come across one of Zfancy videos, he pranks people in a very funny way, and gets them to react in a not so normal way.

His videos are controversial and they have even got him in trouble on more than one occasion, he was once slapped and beaten by someone he tried to prank.

One of his prank victims even went as far as arresting him, after Zfancy pulled a prank that made him to take off his clothes in public.

Zfancy (Ubani Zion Chibuike) was born on the 8th of August 1996 in Lagos state Nigeria, his parents are Igbo and come from Abia state.

According to Zfancy, his father is a no nonsense kind of man, while his mother has always supported him.

He has always been pranking since he was a child, and usually pulled pranks on his siblings and school mates when he was a teenager.

Zfancy has pranking since childhood, he used to pull pranks on his sibling and schoolmates while he was still a teenager.

According to him “Tricking people is part of my lifestyle, we all have a mischievous trait, one way or another. Jokes and stand-up comedy hardly make me laugh, I am very mischievous off camera, I enjoy the fact that when people remember my mischief, they still laugh.”

On why he chooses to prank, he said “I used to pull pranks on my siblings a lot while growing up, we enjoyed having fun with one another, since we were not allowed to go out often like other children”.

Zfancy started shooting prank videos in 2017, and started posting them on YouTube, where he managed to build a fan base.

According to Zfancy, ideas come to him naturally and on the spots, and he is sometimes unable to work on some of his ideas, as a result of the policies and situations in the country.

Zfancy has also featured in some Instagram comedy videos alongside the likes of Sydney talker, Craze clown, Pankeeroy and many others.

His pranks have sometimes landed him in hot water. According to Zfancy, he was once slapped and beaten when he tried to prank someone, and was even arrested by a man who was forced to take his clothes off on one of his prank videos.

It’s one of the hazards of his occupation, and it’s probably why there are not many pranksters like him in Nigeria.

Zfancy net worth has been estimated at $50,000. He is a popular YouTuber and has plenty of subscribers on his channel. He is also a social media influencer and has worked with popular Instagram comedians like Craze clown, Sydney talker, Pankeeroy and others.

Zfancy girlfriend is not known. This doesn’t mean he is not in a relationship, but the media has not caught wind of it yet.

If you want to follow Zfancy on social media, you can do that on the following channels:

Zfancy has carried out many pranks, some of them include Wizkid prank, Witch doctor prank, Tomato seller prank, Supermarket manager prank.

Zfancy is from Abia state, but was born and bred in Lagos state.

Zfancy girlfriend is not yet known.

What is Zfancy real name?

Thank you for reading my Zfancy biography and net worth, if you have any correction or addition, you can leave them in the comment section or contact us.