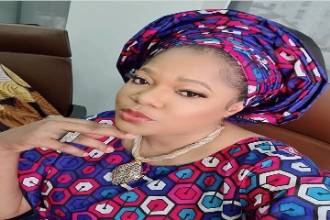 Toyin Abraham who was formerly known as Olutoyin Aimakhu is a Nigerian film actress, producer, director, filmmaker and entrepreneur.

Toyin started acting in 2003, when Nigerian actress Bukky Wright visited Ibadan to shoot the movie Dugbe Dugbe Nbo. It was the first movie Toyin Abraham featured in, and ever since then, she has gone on to become one of the most popular and influential actress in Nigeria.

She is a Multi award winning actress who is known for her comical roles in movies, and as featured in some very popular movies like Okafor’s law, Alakada, Esohe, Diamond in the sky and many more.

Toyin has featured alongside other popular Nigerian actresses like Iyabo ojo, Funke Akindele, Mercy Aigbe, Liz Anjorin and many others.

Apart from movies, Toyin Abraham is also an entrepreneur and is the CEO of Toyin Herbals, a company that sells products for women with infertility issues.

Remember to leave a comment after you finish reading and also share with your friends on social media.

Let us look at the profile of Toyin Abraham:

Toyin Abraham formerly known as Toyin Aimakhu was born on the 5th of September 1982 in Auchi, a town in Edo state in the southern part of Nigeria.

She was born into a poor family of 6, where she had to hawk to support her family.

Her family moved to Ibadan in the south western part of Nigeria, during the early stages of her life and she has lived there for more than half of her life.

Toyin Abraham was born in Auchi, Edo state and attended Obakenzo Nursery and primary school in Benin, before moving to Ibadan in Oyo state.

In Ibadan, she attended the Queen’s staff school, then the St. Annes school Ibadan. She then proceeded to the Osun state polytechnic Iree, where she had her National Diploma.

Toyin also attended the Ibadan polytechnic and got her Higher national diploma in Marketing, as well as the Olabisi Onabanjo university, were she got a degree in philosophy.

Toyin started acting in 2003, when Nigerian actress Bukky Wright came to Ibadan to shoot her movies Dugbe Dugbe Nbo. It was the first movie that Toyin featured in.

Toyin is known for her comical acting in movies, as well as being able to adapt to different roles given to her by different producers and directors.

She has featured in some very big movies like “Okafor’s law”, “Diamond in the sky”, “Esohe”, “Alakada” and has acted alongside some very popular actresses like Funke Akindele, Liz Anjorin, Mercy Aigbe, Iyabo Ojo and many others.

She is also a movie producer and director and has produced some very popular Nigerian movies. She has been nominated and has won multiple awards for her role in movies.

Toyin Abraham is one of the most popular and influential Nigerian actresses, she once campaigned for Goodluck Jonathan, in his bid to be re-elected in 2015.

She even stated her willingness to die for his political party PDP (People’s democratic party) before she withdrew her statement after the backlash she received from Nigerians.

Toyin is also an entrepreneur and businesswoman, who launched Toyin Herbals in 2019, a company that sells products to help women with infertility issues.

According to her, she wanted people to revisit traditional medicine, as people wasted a lot of money and time on modern medicine, which are usually not as effective as that used by our fore fathers.

Mary Lazarus biography and net worth

Some publications cited infidelity as the reason for their failed marriage.

In 2019, Toyin got married to another Nigerian actor Kolawole Ajeyemi, and they gave birth to their first child in August 2019.

Toyin Abraham changed her name from Toyin Aimakhu in 2016, she said the change in name was as a result of a family agreement.

Toyin Abraham net worth has been estimated at $400,000. She is one of the most influential and popular Nigerian actresses.

In 2014, she signed a multi-million-naira contract with Vas2net, a big technological company.

She also signed as an ambassador with Revolution plus properties in Lagos.

Grace Amah biography and net worth

Toyin Abraham has featured in many movies, some of them are:

Some of Toyin Abraham awards and nominations are:

What is Toyin Abraham net worth?

Toyin Abraham net worth is estimated at $400,000. She is one of the most popular and influential actress in Nigeria.

Who is Toyin Abraham husband?

Toyin Abraham is actor Kolawole Ajeyemi, they got married in 2019, and have a child together.

How old is Toyin Abraham?

Thank you for reading my Toyin Abraham biography and net worth, if you have any correction or addition, you can contact us or leave a comment section.