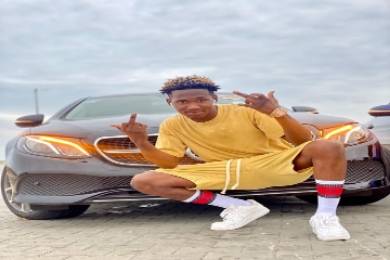 Pankeeroy rose to fame after he appeared in a string of short comedy videos alongside popular Instagram comedians like Sydney talker, Craze clown, Nasty Blaq, Zfancy and others.

His comedy videos are usually centered around common happenings in Nigeria, this has earned him a considerable following on Instagram, who patiently wait for his videos, so they can get their daily fix of Instagram comedy.

Pankeeroy grew up with an interest in comedy, but he only started taking it seriously during his university days, and fully focused on it after graduating.

Remember to leave us a comment after you finish reading, and don’t forget to share with your friends on social media.

Let us see an overview of Pankeeroy profile:

Date of birth: 22nd of January

Pankeeroy whose real name is Nwagbo Chidera Oliver was born on the 22nd of January (his birth year is not yet known, but he is believed to be in his early 20s) in Lagos state Nigeria.

He hails from Imo state, in the eastern part of Nigeria, but was born and bred in Lagos state.

He grew up with an interest in comedy, but he started doing comedy when he was in the University, before fully focusing on it after graduating.

Pankeeroy then proceeded to the Redeemers university, where he graduated in 2019.

Pankeeroy grew up taking an interest in comedy at a young age, but he only started doing comedy during his university days and fully focused on it after graduating.

He rose to fame after appearing in different Instagram comedy skits alongside popular Instagram comedians like Craze clown, Sydney talker, Zfancy, Nasty blaq and a few others.

Many of the videos Pankeeroy appeared in went viral on Instagram, and this gained him a lot of followers on the photo sharing app.

Pankeeroy also does his own comedy skits, which usually revolves around the latest happenings in Nigeria.

His comedy style is unique and very funny, this has earned him a loyal following, who always await his next comedy skit.

Pankeeroy is a very good dancer, and is regularly seen dancing with Sydney talker, Craze clown and Nasty blaq to popular Nigerian songs.

Pankeeroy partnered with Smirnoff Nigeria to feature in a rally show in Benin, he also made the front cover of the first edition of varsity lite magazine.

He is also a Payporte campus ambassador.

Pankeeroy net worth has been estimated at $40,000. He is a social media influencer who makes money from partnering with big brands to promote their products.

He also has a few endorsement deals to his name.

He won the “Fresh model of the year award” at the scream awards in 2016.

Lasisi elenu biography and net worth

Pankeeroy girlfriend is not known.

We will update this page with that information as soon as we get it.

If you want to follow Pankeeroy on social media, you can do that on the following channels:

What is Pankeeroy real name?

What is Pankeeroy state of Origin?

Pankeeroy is from Imo state in the eastern part of Nigeria, but he was born and raised in Lagos state.

Pankeeroy girlfriend is not known. We do not know if he is currently n any relationship. When we get that information, we will update this post.

What is Pankeeroy net worth?

Pankeeroy net worth has been estimated to be at $40,000. He makes money as a social media influencer and from partnering with big brands to help promote their products.

Thank you for reading my Pankeeroy biography and net worth, if you have anything to add or perhaps you have any correction, you can leave them in the comment section below.