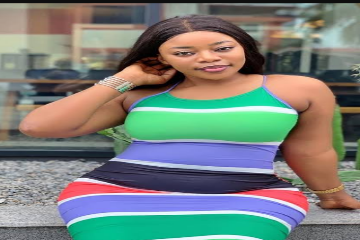 Read all about Ashmusy biography and net worth.

Born Amarachi Amusi. Ashmusy was born on February 20, 1995 in Lagos, Southwest Nigeria. She is Igbo and hails from Enugu state, in the Southeast.

Amarachi is the first of four children of her parents. When being asked how it was growing up, she often mentions how it was not easy growing up and that she had to engage herself in something to take care of her younger ones.

Read my Nasty blaq biography and net worth

The beautiful Nollywood actress and comedienne had her primary school education in Lagos at Good Learning Schools Gbagada and her secondary school at Federal Government College, Enugu, Enugu State.

After her secondary education in 2012, she proceeded to Madonna University, Elele, from where she obtained a Bachelor’s degree in 2016.

27-year old Ashmusy, started her career far back as a teenager in primary and secondary school, where she often featured in the school drama activities.

When being interviewed about why she chose to act, She revealed that acting had always been her dream as a young girl, and that when she was in secondary school, she frequently played lead roles in various drama activities at school.

She narrated how she often comes up with a play, narrates it, and still takes part in the play.

For her, it was just inborn, as she said she loved being dramatic. She also added that no one can do brand influencing unless the person is quite dramatic.

Ashmusy once talked about how she started by creating comedy skits and sharing them on her social media.

The comedienne believes that her skits helped her get into the spotlight, and that her large fan base is due to it. Her skits was loved by many and gathered lots of talk about her being very talented.

Amara has worked with lots of celebrities and skit makers, including the likes of Sydney Talker, Charles Okocha, Twinz Love, Brain Jotter, and many others. She’s currently got endorsements with lots of different brands across Nigeria.

Apart from her acting, social media influencing and skit-making careers, Ashmusy is also an entrepreneur and is currently the founder and Chief Executive Officer of Ashmusy Empire—an online fashion and beauty store where she sells wares and female hair.

Information about her personal life is relatively scarce online as she keeps it private. According to her, her family is her first and biggest fan. It’s unknown if she’s into any relationships.

Read my real warri pikin biography and net worth

Ashmusy is a Nigerian who has made a big name for herself through comedy, acting, influencing and business. She’s also signed with different brands as a media influencer and ambassador. She’s said to be worth an estimate of over $300,000 in 2022.

What is Ashmusy real name?

Her real name is Amarachi Amusi.

How old is Ashmusy?

Who is Ashmusy boyfriend?

It’s unknown if she has one or just that she’s keeping her relationship off social media.