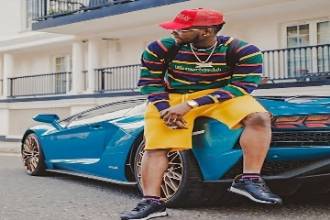 Kizz Daniel was formerly called Kiss Daniel, he had to change his stage name after disputes with his former label G-worldwide entertainment, who claimed ownership of the stage name.

Kizz is one of the most popular Nigerian music artiste, he has won several music awards and has worked with some of the biggest names in the country like Davido, Wizkid, Tiwa savage and many others.

He has three studio albums to his name “New Era”, “No Bad Songz”, “King of Love” and numerous hit singles over the years. Kizz Daniel is one of the most sought after music artiste, as well as an influential music artiste in Nigeria.

The below is the profile of Nigerian singer Kizz Daniel

Kizz Daniel (Oluwatobiloba Daniel Anidugbe) is a Nigerian singer, songwriter who was born on the 1st of May 1994 in Abeokuta North local government area, Ogun state.

He grew up with his father, mother, two brothers and one sister. Daniel lost his dad Kola Anidugbe in 2015.

Kizz Daniel had his primary and secondary school education in Abeokuta where he obtained his first school leaving certificate and west African senior school certificate.

He attended the Abeokuta grammar school and graduated from the federal university of Agriculture in Abeokuta, where he studied water resources management and Agro meteorology (Water engineering).

It was during his university days that Kizz Daniel decided to pursue music alongside his studies.

While in the university in Abeokuta, Kizz Daniel decided to pursue music alongside his studies. He was signed to G-worldwide, sometime in 2013 and released his first song under the label titled “Shoye”.

Kiss Daniel rose to prominence when he released “Woju” produced by DJ Coublon sometime in 2014, the video for Woju was shot in Lagos.

The song got massive airplay on radio, and the video spent 11 weeks on the MTV base official Naija countdown, and held the number 1 spot for 6 weeks.

He also did a remix of the song with DMW superstar Davido and Mavin first lady Tiwa savage, earning the song even more airplay.

Kizz released “Laye” as a follow up song to “Woju” in 2015, and the song also did very well on radio and got massive airplay.

After a hosts of hit songs, Daniel released his first studio album titled “The new era” on May 14, 2016, which would be his first and last album under G-worldwide.

Kizz Daniel left G-worldwide entertainment in 2016 after a long dispute, which was resolved in court and floated his own imprint called “Flyboy Inc.”.

He signed Demmie Vee and Philkeyz to his label, and released his 2nd studio album titled “No Bad songz” in 2018.

It debuted at No. 55 on the US Itunes chart and became number 1 on the world album chart within 24 hours of its release.

The album received many positive reviews and cemented Kizz Daniel stance as a force to reckon with in the Nigerian music industry.

In 2020, he released his 3rd studio album titled “King of Love” which also received many positive reviews.

Rema biography and net worth

In 2019, Kizz Daniel split from his record label G-worldwide entertainment due to contractual issues, it was alleged that Daniel was paid 30,000 naira as salary, and was not allowed to feature other artistes.

G-worldwide refuted the claims and said they had paid Kizz over 120 million naira. They sued Kizz Daniel to court for many possible offences.

Kizz Daniel was not found guilty of any of the crimes he was accused of, but had to change his name from Kiss Daniel to Kizz Daniel after G-worldwide claimed ownership of the stage name.

All Kizz Daniel social media and music streaming accounts were made to reflect the name change.

In 2018, Kizz Daniel former label record label G-worldwide made a move to own the rights of the “Kizz Daniel” name and further advised the singer to desist from the name or face legal action.

Kizz Daniel net worth is estimated at $500,000. He owns two houses in Lagos and has plenty cars to his name.

He is one of the most popular and influential artist in Nigeria. He makes money from performing in shows and has numerous endorsement deals to his name.

He is also one of the most followed Nigerian Celebrities on Instagram and has over 2 million followers on the photo sharing app.

Kizz Daniel lost his father Kola Anidugbe in 2015. Although he was absent from his father’s burial, he did share a touching and emotional post on Instagram, describing himself as a stupid son for not being there for his father, for loving the fame above his family and for thinking that the typhoid which took his father’s life was not serious.

Who is Kizz daniel’s wife?

Kizz Daniel is not yet married. It is believed that he is in a relationship, but the name of his girlfriend is not yet known. He has also been linked with Nigerian singer “Chindinma” in the past, after pictures of them surfaced online.

Is Kizz Daniel a Yoruba guy?

Yes, Kizz Daniel is a Yoruba guy, he hails from Ogun state.

How old is Kizz Daniel?

Is Kizz Daniel in a relationship?

Kizz Daniel is rumored to be dating someone, but the name of his girlfriend is not yet known.

Thank you for reading my Kizz Daniel biography and net worth, if you have anything to add or perhaps, you have some sort of correction, you can either contact us or leave a comment below.