Taaooma biography age, career, education, net worth and many more

Taaooma is a Nigerian Instagram comedian and cinematographer who was born in Ilorin, Kwara state on the 28th of February 1999.

Taaooma rose to prominence sometime in 2016 by making hilarious skits in which she mimics Nigerian mothers and their reactions to their children’s behavior.

In a short time, Taaooma has garnered a huge following of over a million on Instagram and also runs a YouTube channels that has thousands of subscribers.

Taaooma skits are very hiliarious, she tends to pay attention to the little detail, this has made her very popular on Instagram and why she has been able to attract huge following in a very short time.

Taaooma has been accused of promoting child abuse in her videos, this is because she tends to depict Nigerian mothers as quick to raise their hands on their children. Taaooma has defended her videos by saying she doesn’t in any way promote child abuse, and her videos are strictly meant for laughs.

If you want to know about Taaooma biography, Taaooma education, Taaooma career, Taaooma net worth, Taaooma boyfriend, Taaooma awards, Taaooma age and others.

Remember to leave a comment after reading, let’s get into it then…

Before we get into the post proper, let me show you an overview of Taaooma.

Taaooma net worth: Not yet available. 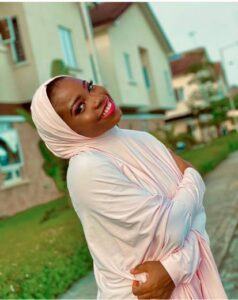 Apaokagi Maryam Abisola AKA Taaooma is an Instagram comedian and cinematographer that is known for creating funny skits of her mimicking Nigerian mothers and their behavior towards their children.

Taaooma was born in Ilorin Kwara state on the 28th of February 1999 into a family of 5, she is the last born of the family.

Taaooma’s family traveled to Namibia in 2009, there she completed her primary and secondary school education.

In 2015, she returned to Nigeria, where she gained admission into the Kwara state university (KWASU), where she studied tourism and hospitality.

She started doing comedy in 2015, after her boyfriend Green Abdul Azeez taught her video editing and encouraged her to embrace her talent.

She came to prominence sometime in 2016, and she then her fan base has continually grown, she now boasts of having over a million Instagram followers.

Taaooma family moved to Namibia in 2009, it was in Namibia that she attended “Amazing kids private school and academy” and also “Concordia college, Windhoek” for her primary and secondary school education.

After returning to Nigeria sometime in 2015, she gained admission in the Kwara state university (KWASU) where she studied tourism and hospitality.

According to Taaooma, her first choice course was law, but since it wasn’t available at the time, she simply went for anything just to have a degree.

Taaooma tried to balance schooling with comedy by going home every weekend to shoot her skits and then return back to school to edit them.

According to taaooma, it wasn’t easy balancing her education and comedy, her mother (Mrs Aishat Apaokagi) initially didn’t support her comedy because she believed it will distract her from school.

Taaooma does short comedy skits on Instagram, she is most famous for mimicking Nigerian mothers’ behavior towards their children. Her hiliarious videos have got her over a million Instagram followers and YouTube subscribers.

Taaooma skits are very hiliarious, she tends to pay attention to the little detail, this has made her very popular on Instagram and why she has been able to attract huge following in a very short time.

According to taaooma, her boyfriend Green Abdul Azeez also known as Abula was the once who encouraged her to harness her talent and taught her video editing, she also spent some time learning video editing from youtube.

She came to prominence in 2016, when one of her videos went viral on Instagram, and ever since then her following has grown exponentially. Taaooma is now among some of the most followed Nigerian Instagram comedians that also includes Sydney talker, Craze clown etc.

Along with her boyfriend Abula, they own the company called “Greenade company”, a full time video production company.

Taaooma net worth is not yet known, but she is known to make money from promoting artiste’s songs on her Instagram page and also she gets endorsements from companies who want to use her fame to promote their products.

Taaooma and her boyfriend also co-own the Greenade company, a full time video production company, she has also stated that she will go into producing more movies, this will also shoot her net worth up.

Most people want to know who is taaooma boyfriend. His name is Green Abdul azeez AKA Abula. According to taaooma, it was her boyfriend who helped her harness her talent, as she didn’t initially plan to do comedy skits.

Her boyfriend also helped her convince her mother that doing comedy wasn’t really a big deal.

Thank you for reading Taaooma biography, if you have corrections to make to this post, you can politely leave them in the comment section.