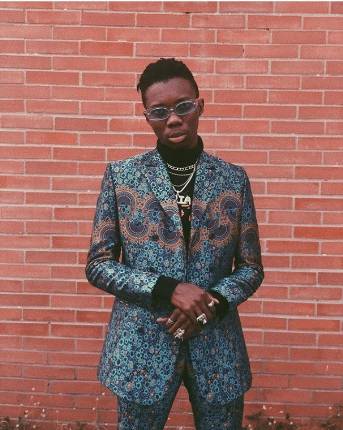 Blaqbonez (Emeka Akumefule) is a Nigerian rapper and song writer who is signed to 100 crowns record label, which is a subsidiary of chocolate city.

The self-proclaimed best rapper in Africa (BRIA) is known for his witty punchlines and bars.

Blaqbonez started rapping knew he could rap at the age of 13, when his cousin challenged him to come up with his own lyrics for a song that he liked.

Blaqbonez was the winner of “Terry tha rapman’s zombie competition” which got him a feature on Terry’s album “World domination”.

He released a track titled “Best rapper in Africa” which caused a lot of controversy online. According to Blaqbonez, it was a wakeup call to all African rappers.

Remember to leave us a comment after reading and also share on social media with your friends and loved ones.

Oxlade biography and net worth

An overview of Blaqbonez profile:

Blaqbonez (Emeka Akumefule) who was born on the 29th of January 1996 is a Nigerian rapper and song writer, and the self-proclaimed “Best rapper in Africa”.

He was born to an Igbo family and grew up with his mother, who is a pastor. He discovered he could rap at the age of 13 years, when he was challenged by his cousin to write his own lyrics to a song.

Blaqbonez obtained a degree in Engineering at the Obafemi Awolowo university.

Blaqbonez discovered he could rap at the age of 13. According to Blaqbonez, he was listening to the radio with his cousin, when the song of a 12 years old rapper came on, his cousin then challenged him to come up with his own lyrics for the song, since he liked criticizing rappers so much, and in a few minutes Blaqbonez has his verse ready.

His parents were not in support of his chosen career path, but that didn’t deter Blaqbonez, who pursued his dreams in secret.

Blaqbonez first musical project was “Hip hop is blaq”. He participated in Terry tha rapman zombie competition, which he won. This gave him an opportunity to feature on Terry’s next album “World domination”.

He also won the Rhythm FM freestyle fury, becoming rhythm’s artist of the month for that year.

His album “Bad boy Blaq” was listed by sound city TV among the album of the year, alongside Burna boy’s “African giant” and MI Abaga’s “Rendezvous”.

Blaqbonez has released a total of 8 Eps as well as a mixtape, his latest EP titled “Mr Boombastic” was released in 2019.

He released a single titled “Jesus is Black” a day before the album release, the single served as a letter to Kanye west, who was also releasing his album titled “Jesus is King” the next day.

Blaqbonez released a controversial song in 2019 titled “Best rapper in Africa”, which was a dig to all in Africa. According to Blaqbonez, the track was meant as a wakeup call to all African rappers.

Blaqbonez net worth is not yet known, but it has been estimated to be between $50,000 and $100,000. He definitely is one of the most promising rappers to come out of Nigeria in while, especially in an industry dominated by Afrobeat singers.

He is signed to 100 crown record label, which is said to be affiliated to chocolate city, the label that used to house Nigerian rap legend “MI Abaga”.

If you want to keep in touch with Blaqbonez on social media, you can do that via the following channels:

Some of Blaqbonez songs are:

Thank you for reading my Blaqbonez biography, if you have anything to add, or perhaps, you have corrections, you can leave them in the comment section.

Thank you for reading.