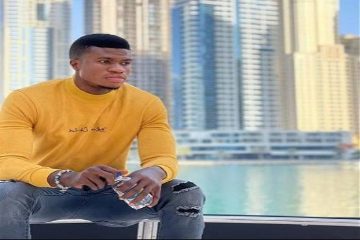 Read all about Zicsaloma in this Zicsaloma biography and net worth.

Zicsaloma (Aloma Isaac Junior) is a Nigerian comedian, singer, song writer and actor who is famous for his comedy skits on Tik Tok and Instagram.

Zicsaloma initially started out as a musician and was a contestant at “The voice Nigeria” and also the Nigerian idols.

He started making comedy videos for fun during the lockdown and started to get a loyal following on Tik Tok. Zicsaloma then decided to quit his lecturing job to focus more on comedy.

Read my Sydney talker biography and net worth

The below is an overview of the profile of Zicsaloma:

Zicsaloma (Aloma Isaac Junior) is a Nigerian Instagram & Tik tok comedian who was born on the 7th of November 1991 in Kaduna state.

Zicsaloma is from a family of 5 children, and he is the 4th child of his parents. His father is a retired soldier, while his mum worked as a secretary.

He spent his childhood in the military barracks where he was born and raised before his family relocated.

It was here that he developed a passion for music, as he could easily tell who had a god voice and who didn’t.

He then went for a 2 years diploma course in Law in the Ahmadu bello university Zaria. He also studied English & Literary studies at Abia state University Uturu. According to him, he studied the course in order to improve his songwriter skills.

Zicsaloma’s dream was to become a professional musician, he has already released songs like “Dance” & “Believe” before he became popular from comedy. He was a contestant at “Voice Nigeria” and “Nigerian idols”.

He started doing comedy for fun in 2017, during the lockdown and released a few short skits on Tik Tok which became really popular.

After seeing that people liked his videos, he continued making them, and he no time built a following on Tik Tok, which got him verified.

He became popular on Tik Tok while he was still a lecturer and decided to quit his lecturing job to focus more on comedy.

Zicsaloma is mostly known for playing female roles which according to him is because people found it very funny, and they were generally more accepted than his other skits.

He has promised to release more songs in the future, so people can also see his musical talent.

Zicsaloma girlfriend is not currently known. He keeps his private life to himself, and he has said in an interview that he doesn’t believe in Love at first sight.

Zicsaloma net worth has been estimated at $20000. He makes money from partnering with brands and also from promotions, as he has a huge following on both TikTok and Instagram.

If you want to follow Zicsaloma on social media, you can do that via the following channels:

Read my Nasty blaq biography and net worth

What is Zicsaloma real name?

Where is Zicsaloma from?

Thank you for reading my Zicsaloma biography and net worth, if you have any addition or correction, you can leave them in the comment section below or visit our contact page.