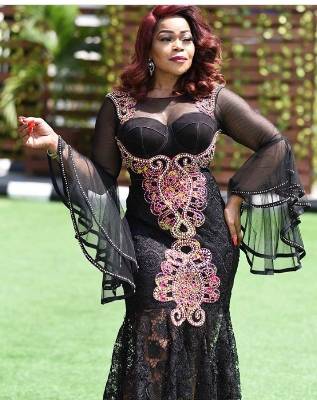 Shaffy Akinrimisi bello is a Nigerian actress and singer who was born on the 9th of October. She is a familiar actress to Yoruba movies & TV series watchers.

She is beautiful, light skinned, creative and a very talented actress, whose ability to interpret are roles brilliantly has gotten her a lot of fans nationwide. Shaffy is able to bring her characters to life and is very energetic on screen, as well as being able to adapt to different roles.

Shaffy first rose to prominence when she featured vocals in a 1997 hit song by Seyi sodimu titled “Love Me Jeje”.

She has featured in some popular movies/TV series like Tinsel, when love happens, Gbomo gbomo express, taste of love and many others.

Remember to leave us a comment after you have finished reading and also share on with your friends on social media.

Rita Nzelu biography and net worth

An overview of Shaffy bello’s profile:

Shaffy Akinrimisi bello is a Nigerian actress and singer who was born on the 9th of October, her birth year is not yet known.

In 1987, Shaffy moved to the United states, it was there she completed her education, before returning back to Nigeria in 2009.

After moving back to Nigeria, she met a more improved movie industry and starred in her first movie, a Yoruba movie titled “Eti Keta”.

She starred as Joanne Lawson in the popular Nigerian TV series titled “Tinsel”, and as Adesuwa in the “Taste of love”.

Shaffy is a very talented, beautiful and creative actress, she is able to bring her characters to life like no other can.

Shaffy is a very familiar face in the Nigerian movie industry, she has acted in several Yoruba and English movies, as well as TV series.

Balancing your career and your family is not an easy feat, many actresses are usually unable to balance being on screen with family duties, this means that one has to be sacrificed for the other.

Shaffy has been able to find a balance between family and acting, she usually shuffles between the United states & Nigeria, where she spends time with her family, when she is not on set.

Shaffy bello disclosed on Instagram that she would have divorced her husband, if she had entered the movie business as a young lady.

Sylvester Madu biography and net worth

Shaffy bello net worth is estimated at a $100,000. She has featured in some very popular Yoruba/English movies and TV series, and gets paid a lot of money as a popular actress.

She is one of the most famous and popular Yoruba movies actress in Nigeria and has many awards to her name as well.

Nominated for the best lead actress in an English movie in the 2012 Best of Nollywood awards.

Shaffy bello has featured in many movies, some of them are:

If you want to follow Shaffy bello on social media, you can do that via her Instagram handle:

Lasisi Elenu biography and net worth

Shaffy bello has been married for over 25 years, she has been able to balance her acting career with being married.

Does Shaffy bello have children?

Shaffy bello has two children, Ashley and Ashton who are vloggers.

How old is Shaffy bello?

Shaffy bello real age is not really known, but she is over 45 years.

Thank you for reading my Shaffy bello biography and net worth, if you have anything to add or perhaps, you have corrections, you can leave them in the comment section below.