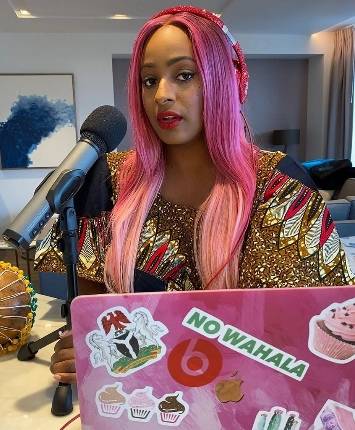 DJ Cuppy (Florence Ifeoluwa Otedola) is a Nigeria Disc jockey, singer and record producer, she is the daughter of billionaire businessman Femi Otedola.

DJ Cuppy grew up in Lagos, up till the age of 11 before moving to London to complete her education.

She is the most famous DJ in Nigeria with over 5 million Instagram followers, as well as one of the richest artiste in Nigeria.

Cuppy is talented, beautiful and brilliant, and although she is very likeable, she does have a lot of haters, partly due to the fact that she comes from a rich home. This doesn’t seem to affect her much, as she is always seen having fun on social media.

Cuppy has achieved a considerable amount of success in such a such time, she has endorsement deals with Pepsi and Samsung, as well as having a range of awards to her name.

If you want to read about DJ Cuppy biography, DJ Cuppy net worth, DJ Cuppy education, DJ Cuppy career, DJ Cuppy personal life, DJ Cuppy boyfriend, then you are in the right place.

Remember to leave us a comment after reading and don’t forget to share with your friends on social media.

DJ Spinall biography and net worth

DJ Cuppy (Florence Ifeoluwa Otedola) was born on the 11th November 1992 in Lagos state Nigeria, where she lived till age 11, before she moved to London to complete her education.

She lived in Illupeju for six years before moving to Ikeja were she completed her Primary education.

She has two sisters (Temi and Tolani) and a brother (Fewa).

Cuppy attended Grange school in Ikeja, Lagos state. She then relocated to London for her GSCEs and A-levels.

She graduated from King’s college London with a degree in Business and economics, and also earned a Master’s degree in Music business from the New York University.

Cuppy is a Disc jockey, record producer, singer and online personality. She was the resident DJ at the MTV Africa music awards in Durban.

She played at the Tatler and Christie’s art ball in London and at the financial times luxury summit in Mexico City.

She was featured on the cover of the guardian life Magazine and was the official DJ for the 2015 oil barons’ charity in Dubai, she was the first African to perform at the event.

In 2018, Cuppy was announced as the official DJ ambassador for Pepsi, and she appeared in Pepsi’s commercial “NaijAllTheWay” ahead of the 2018 world cup.

In 2020, Cuppy became the host of “Africa Now radio” on Apple music beats.

Cuppy has been criticized for sometimes releasing “not so good songs”, but that has not deterred her from dropping songs.

Cuppy is talented, beautiful and brilliant, and although she is very likeable, she does have a lot of haters, partly due to the fact that she comes from a rich home. This doesn’t seem to affect her much, as she is always seen having fun on social media.

Janemena biography and net worth

As at the time of writing this post, DJ Cuppy is not currently in a relationship, but she has dated Asa Asika, Victor Anichebe and has been rumored to have been in a relationship with Broda Shaggi and even Anthony Joshua.

Some of DJ Cuppy songs are:

DJ Cuppy was nominated for the best female DJ at the ELOY awards.

She won the best female DJ at the Nigerian entertainment awards.

DJ Cuppy is one of the richest artistes in Nigeria and is estimated to be worth $2 million. Apart from her father being rich, she has been able to pull in great amount of money from her work as a Disc jockey and an online personality.

She has a lot of following on social media, with over two million followers on both Twitter and Instagram.

What is DJ Cuppy net worth?

DJ Cuppy net worth has been estimated at $2 million.

How old is DJ Cuppy?

Who is DJ Cuppy father?

What is DJ Cuppy real name?

Temi Otedola biography and net worth

Thank you for reading my DJ Cuppy net worth and biography, remember to leave us a comment.

If you have any addition or correction to make, leave them in the comment section.